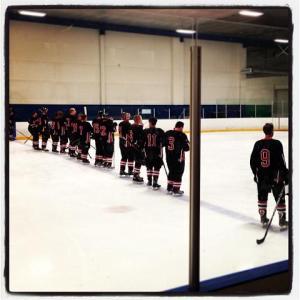 To the Team mates of the CLA Hounds, Langley BC:

I’m the proud wife of Number 5 on your team, Stacy Siewert. To be honest, I used to not like the game. I thought that the time of night that it was, and the weekends, were such an interruption and inconvenience to my life. Over the years, I have watched what the game is all about, and what you are all about, and I realized how blessed we are that Stace gets to be a part of this great community of men. 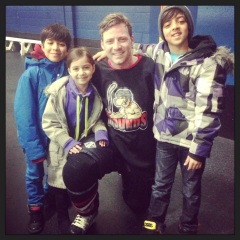 Jason, I have read the newsletters, the updates, and the heart behind why you do this every year. You are a truly incredible man. You not only strive to put together great hockey for the hounds, but I believe in your heart and desire to show the team what REAL MEN look like on and off the ice. Regardless of the wins, losses, or the unfair penalties called against you, INTEGRITY and class are at the forefront of your game.

To all the Hounds – I don’t know too much about hockey I’ll admit, but I do think you have been unfairly reffed during your games, and yet through and through, you handle it with class. I’m not saying your team is perfect, as even you know that, but as a fan and an audience member, I have watched through out the season bad calls being made against your team, or – ones that should have been called on the other teams against you – not called. I know this is church league, but I’d hope it to be more integral than it’s been.

Your actions have spoken louder than words this season, and I hope that something is really done about the way your team is treated in future with this league.

Jay L, & Chad Bennett – you were outstanding in this game, well done!

Stacy, way to score that 3rd goal. The kids and I were so proud to watch you play. You are truly an amazing player, and its been so fun watching you play with these guys, and joining you for the odd pizza after the game at Andreas’.

I believe the best part of the night was after you all shook hands with the other team, then you all came out to the ice, raised your sticks in your black and red jerseys, and you turned to us, saluted and acknowledged your fans, friends and families. It brought me to tears actually. While I was sad for your loss in the game, what moved me was how you honoured us. While the other team basked in their victory, I did not see them salute their fans, ( maybe I missed it, but I don’t think so ) they just huddled in their trophy. Understandable, but, I just saw gestures of them wanting their fans to cheer louder for them. Their actions were a resounding difference against yours.

I know this may sound silly, being the kind of league that it is, but I guess deep down, I believe you are all men of honour, and ultimately that wins above all else ( and no – that’s not just something that losers say lol )

This season was yours. It was a good one. To some of the guys that I’ve gotten to know – Jason, Jay, Lu, Ron, Davie, Stevie, and all the others, I’ll miss watching you play. Chin up fellas. You’ve made a real fan out of me, and that’s near impossible haha. Don’t be strangers okay. We’ve grown to love you more than just in the game.

Blessings as you celebrate Easter with your families. Live life on purpose. May it always be about more than just a game, and carry on…